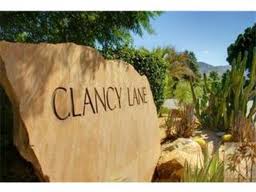 RANCHO MIRAGE – If you live in the Palm Springs Valley, then you have likely heard of Clancy Lane – a well-known street connecting Bob Hope Drive with Monterey Avenue.  This is an area rich in its equestrian and agricultural heritage. Some of our valley’s most well-heeled and sophisticated residents now make their homes in the Clancy Lane neighborhood, which includes some exclusive gated communities as well.

Clancy Lane boasts some interesting history harkening back to the 1920s and before.  From Civil War until the early 1920s, travelers passed through Rancho Mirage on the Bradshaw Trail (what is now Highway 111) on their way to Yuma.  As early as 1924, the area’s promotion began with the purchase of hundreds of acres of land from Southern Pacific Railroad by Bert Davie and E.E. McIntyre.  Davie, from Michigan, was an ardent promoter upon seeing the flourishing date groves at nearby Wonder Palms Ranch.  He then built a ranch house at Clancy Lane and built a north-south thoroughfare connecting his ranch to the Bradshaw Trail and named it Rio del Sol, which later became Bob Hope Drive.

In 1932, Clancy Lane’s namesake Les Clancy, built a home in the development after arriving in the area with his wife and brother.  He was the first of the gentlemen farmers to build here.  Hailing from Santa Monica, the area actually became known as “Little Santa Monica.”  In the tradition of earlier settlers of the Palm Springs area, the Clancy’s built an adobe on their property and planted it up with grapes, dates and grapefruits.

If you are interesting in finding out more about available Clancy Lane properties,  call Kim Kelly with HK Lane Real Estate.  She will gladly tour you about the neighborhood and show you the highly desirable properties for sale in this historic and interesting part of the Palm Springs Valley.

Coachella Valley Retreat For Sale.  $1,875,000.  This incredible 2 acre parcel is so unique and … END_OF_DOCUMENT_TOKEN_TO_BE_REPLACED

Coming Soon in the Coachella Valley.  Some new properties are coming up in our beautiful eastern … END_OF_DOCUMENT_TOKEN_TO_BE_REPLACED