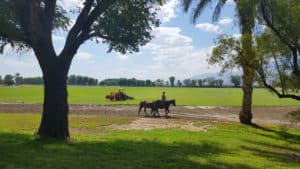 Investment Properties in the Coachella Valley range from homes, to farms and vacant land!

Inflation Cools a bit and consequently here in the Coachella Valley as everywhere else, mortgage Rates decline just a bit.  With the inventory already low, the reduced Mortgage rates will certainly drive buyers to our beautiful desert!  The following article is courtesy of Brad Tilford, with Franklin Loans, a local lender that can get your loans done!  Call local Realtor, Kim Kelly, if you are thinking of buying or selling your home, land or Equestrian property.  760-285-3578.

Overview: Over the past week, investors were mostly focused on the latest inflation data. The reading came in weaker than expected, and mortgage rates ended the week a little lower.

The Consumer Price Index (CPI) is a closely watched inflation indicator that looks at the price changes for a broad range of goods and services. To get a better sense of the underlying long-term trend, investors generally prefer to look at core CPI, which excludes the volatile food and energy components. In August, core CPI rose 0.1% from July, which was less than expected. On an annual basis, core CPI was 4% higher than a year ago, a very high figure by historical standards. However, this was down from an annual rate of increase of 4.5% in June, a level not seen since 1991. Since inflation is negative for mortgage rates, this lower-than-expected data caused rates to decline.

The Department of Labor releases the total number of new claims for unemployment insurance each week, and the latest reading was 310,000, the lowest level since March 2020. This was down significantly from the inflated figures seen during the early months of the pandemic, but still well above the readings around 220,000 that were typical during 2019.

As expected, the European Central Bank (ECB) announced at Thursday’s meeting that it will reduce its bond purchases, but it did not specify by exactly how much. Rather, the meeting statement said that it will proceed with a “moderately lower pace” of net asset purchases. While the U.S. Federal Reserve has not yet begun to scale back its bond buying program, it is expected to do so before the end of the year.

Is Lithium the answer for saving the Salton Sea?  For us locals, the Salton Sea is the source of the … END_OF_DOCUMENT_TOKEN_TO_BE_REPLACED

What's ahead for real estate in 2022?  So, we're half way (almost) through the year and the … END_OF_DOCUMENT_TOKEN_TO_BE_REPLACED

March real estate update:  The Coachella Valley continues, like most of California to notch record … END_OF_DOCUMENT_TOKEN_TO_BE_REPLACED