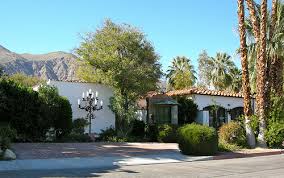 Palm Springs’ first and oldest neighborhood, Old Las Palmas, is a community that stands out among the rest. Whether you’re looking for your first home or investing in international real estate, Old Las Palmas has broad appeal for anyone who wants to live the Palm Springs lifestyle.

Located west of Palm Canyon Drive in central Palm Springs, Old Las Palmas dates back to the the mid-1920s, when it was first developed father-and-son builders from New York, Alvah and Harold Hicks. The development was designed to make the most of the bucolic and winding streets, beautiful landscape and the gorgeous views of the picturesque Dry Falls Canyon and the San Jacinto and Santa Rosa Mountains.

The 300 plus homes in the development boast unique and spectacular architecture that has attracted notable residents throughout the years, fostering a rich history that is hard to match and ideal for those investing in international real estate. Homes range in design from Spanish-style ranches and Mediterranean villas to Mid-Century Modern and large estates. The secluded location provides peace and quiet, serving as a respite for its diverse residents.

The exclusive community has been home to many movie stars, musicians, Hollywood moguls, designers, artists, entrepreneurs and CEOs who retreat to Old Las Palmas to get away from their busy lives. It has always attracted a large number of glamorous celebrities, especially during the 1950s. The impressive list of other celebrities who lived in Old Las Palmas includes Gene Autry, Donna Reed, George Randolph Hearst, Kirk Douglas, Alan Ladd, Sidney Sheldon, George Hamilton, Joseph Barbera, Harold Mirisch, William Powell, Rona Barrett, Rudy Vallee, Leo Spitz, Harold Robbins, Jack Warner, Sidney Korshak, Kitty Carlisle and Lily Tomlin, among many others. For example, the world-famous Liberace bought Alvah Hicks’ renowned home and transformed it into the opulent Casa de Liberace, where he lived until his death in 1987. image: irishfireside.com

Coachella Valley Retreat For Sale.  $1,875,000.  This incredible 2 acre parcel is so unique and … END_OF_DOCUMENT_TOKEN_TO_BE_REPLACED

Coming Soon in the Coachella Valley.  Some new properties are coming up in our beautiful eastern … END_OF_DOCUMENT_TOKEN_TO_BE_REPLACED