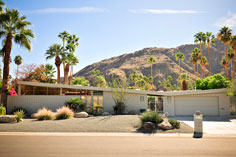 Palm Springs has many cool neighborhoods with much history to write about – Vista Las Palmas is one of those  –  a scenic and historic Mid Century community nestled up against the San Jacinto Mountains in the northwest side of Palm Springs.

A little of the history – in the late 1950s, a father and son team of George and Robert Alexander of the Alexander Construction Co. built over 1200 “tract” homes designed in what is now called “Southern California Modern”  style  in the Palm Springs area.

For the times, the homes they built were very modern and included soaring rooflines with elegant minimalist facades – inside they boasted post and beam construction, walls of glass and spacious, open floorplans, capitalizing on the Sou. Cal. lifestyle which flows from the inside to outside.

The Alexanders began constructing homes in the southeast end of Palm Springs, but as they grew more successful, they were building in the Vista Las Palmas area on the northwest side of town near Las Palmas where the wealthy Hollywood crowd had been building Spanish Revival homes.

Also, the firm of Palmer and Krisel built about 330 homes in Vista Las Palmas.  Krisel is known for his iconic “butterfly” roof design and their architect is responsible for the distinctive “Swiss Miss” A-frame style found there as well.  The mix of design styles  in Las Palmas has created one of the most architecturally diverse, yet cohesive communities in Palm Springs.

Also to be mentioned is “The House of Tomorrow” located in Vista Las Palmas- a futuristic style house for the time.  It was featured in Look Magazine in 1962 and set a new standard for luxurious living in Southern California.  The home became the secret getaway for Elvis & Priscilla Pressley in 1968 – it was where they honeymooned.

In the 1950s, many celebrities from Hollywood designated their homes in Vista Las Palmas as their desert retreat.  Some of the elebrities who once lived and played there include Marilyn Monroe, Dean Martin, Peter Lawford, Debbie Reynolds, Joan Collins, George Hamilton, Kirk Douglas, Dinah Shore and more.

Today, Vista Las Palmas has become a symbol of Mid-Century Modern design for the distinctive homeowner who wants the relaxed lifestyle of the desert. Owners include full-time residents, Snowbirds and weekenders from nearby Los Angeles.  The residents in this iconic picturesque neighborhood share an interest in preserving the history and architecture that is unique to Palm Springs and so perfectly complements our desert landscape here.

Should you be interested in looking at Homes for Sale in the Vista Las Palmas neighborhood in Palm Springs, give Kimberley Kelly, Realtor with HK Lane a call and set up an appointment today.

Coachella Valley Retreat For Sale.  $1,875,000.  This incredible 2 acre parcel is so unique and … END_OF_DOCUMENT_TOKEN_TO_BE_REPLACED

Coming Soon in the Coachella Valley.  Some new properties are coming up in our beautiful eastern … END_OF_DOCUMENT_TOKEN_TO_BE_REPLACED